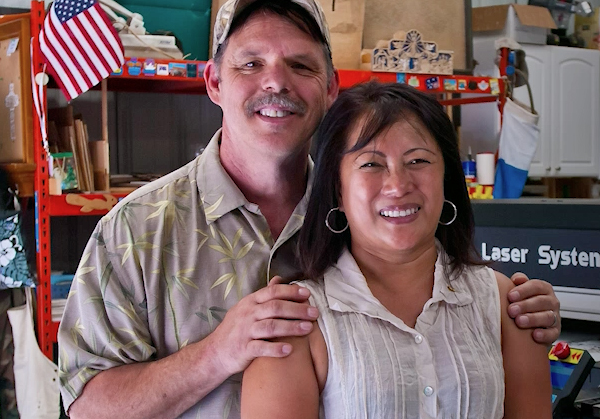 Al and Christy Kroell are the recipients of the national Sargent Shriver Achievement “Veterans Serving America” Award. They will receive the award in person at the annual National Community Action Partnership conference in Chicago.  The video, featuring the Kroell’s and Fresno EOC/CDFI can be viewed here:

Al and Christy Kroell had been serving in the military 20 years when Al experienced the unthinkable. He had an accident that quickly ended his career. It took over 52 surgeries in subsequent years to rehabilitate him back. Several years after Al’s accident, Christy sustained a near fatal car crash that left her disabled as well and had no choice but to leave her job at the Navy Credit Union.

In 2004, Al and Christy were no longer affi liated to the military base in Southern California so they decided to move to Squaw Valley. The couple endured years of trying times as Al continued to have multiple corrective surgeries to reach rehabilitation. They hoped that one day, the hard times would end and they would start a new business together.

Over the years, Al always enjoyed making wood engravings as keepsakes for his friends. With his life long passion, Al decided to start a business. He sought help at the local Small Business Administration SCORE Chapter. This group of volunteer business experts guided him as he completed his business plan. When he started to look at his financing options, the reality of capitalizing a startup business dawned on him. A laser engraver is an expensive tool and banks typically want to see 2 to 3 years’ experience before lending to a business. After months of planning and preparation, Al and Christy applied and received an equipment loan from Fresno CDFI. They bought the machine and opened their doors; ChristyAl Plaques & Engraving was born!

Starting a new company takes hard work and dedication, there are always ups and downs, but the Kroells maintained a positive outlook through it all! They are doing what they love and hope to grow in the future. They recently fulfilled an order from the local high school trade fair. ‘Things are looking up!’

Looking to expand your business?

Learn more about our enterprise loans by clicking the link below!