CDFIs and the Legacy of Dr. Martin Luther King, Jr. 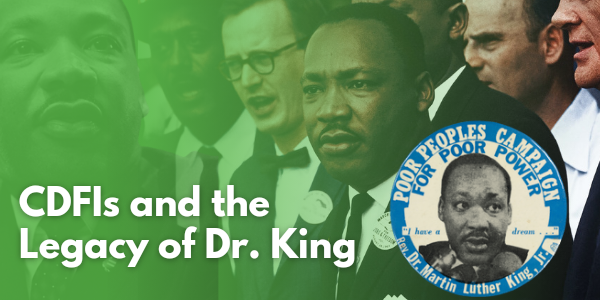 On the night of his assassination, Dr. Martin Luther King Jr. was just two weeks away from leading a major march in Washington D.C. against poverty. His plan was to bombard the decision-makers in D.C. with the plight of the disinvested and economically destitute Americans in a way that would be unignorable.

The plan named the Poor People’s Campaign, brought together the poor in America in a coordinated, multiracial demonstration to achieve relief from their suffering through economic reform. The structure of the campaign was a culmination of the lessons King learned from the boycotts, the sit-ins, and the marches on Birmingham and Selma. It was strategically designed to be a powerful, interruptive, and dramatic show of non-violent force that would persist until Congress agreed to meet the demands of the American poor.

The five demands were distilled into an “Economic Bill of Rights” which insisted Congress provide:

King was killed before the campaign began, and while his successor Ralph Abernathy led the charge well, they were unsuccessful in securing the sweeping reforms they demanded.

In the 55 years since the Poor People’s Campaign created its Economic Bill of Rights, neither poverty nor racism has been resolved and the same demand for social and economic justice continues to sound. New leaders have continued to fight for the rights of the poor, minority, and underinvested communities and some progress has been made, one such development being the creation of the community development financial institution, known as a CDFI.

For us at Access Plus Captial, it is in the fourth demand of the Economic Bill of Rights that we are able to see the contribution of our work to the fulfillment of King’s vision. We strive daily to eliminate economic barriers to financial success through fair and equitable community lending and investment, and we carry out this work with the hope of one day seeing a Central Valley where access to capital is no longer a barrier to success.

Small businesses are the primary vehicles through which new jobs are created and without new businesses entering the community marketplace, residents are forced to spend their money outside of their communities and abandon their neighborhoods in search of viable employment opportunities elsewhere. Without access to the capital needed to build for themselves, the residents of neglected communities continue to be held captive to the priorities of others. Small business is the backbone of the American economy and community businesses are the backbone of the neighborhood.

A study conducted by the Small Business Administration found that more than half of Americans either own or work for a small business, and small businesses create about two-thirds of new jobs in the U.S. each year. CDFIs play a pivotal role in the creation, education, and sustenance of minority-owned small businesses and affordable housing within historically excluded and disinvested communities, the very communities King considered as he penned the Economic Bill of Rights.

As we honor King’s legacy, let us not reduce him to a collection of feel-good quotes and utopian dreams. Dr. Martin Luther King, Jr., at his core, was a radical, passionate, and strategic activist with an eye on the future and a burning commitment to dismantling injustice in all of its forms, even at the cost of his life.

It is our goal to be just as passionate in our work for economic justice as we carry the torch of change for our generation and generations to come.